Continued analysis of Parker Solar Probe data is starting to create a clearer picture of the sun’s magnetic activity, which may bolster our ability to predict dangerous solar events.

And the more information that comes in, the more it all fits with theories posited at the turn of the millennium by researchers at the University of Michigan. Justin Kasper, professor of climate and space sciences and engineering at U-M, said those current and former U-M researchers, led by Lennard Fisk, the Thomas M. Donahue Distinguished University Professor of Space Science, pieced together an intricate picture of the sun’s workings long before Parker launched in August 2018.

“This isn’t like having the data and coming up with a theory that happens to line up with it,” said Kasper, who serves as principal investigator for Parker’s Solar Wind Electrons Alphas and Protons (SWEAP) instrument suite. “This is possibly observational closure emerging on a theory that was put out two decades ago.”

The new data is summarized and compared with the previous work in Astrophysical Journal Letters.

Sensors aboard the spacecraft have produced data suggesting:

Each of these items reveals fundamental processes occurring at the sun and this understanding has practical applications here on Earth.

“What this gives us is insight into how the sun produces slow and fast solar winds,” said Kasper. “Defining that mechanism is key to predicting when a transition from slow to fast solar wind is going to strike Earth and create a geomagnetic storm.”

Those conclusions agree with predictions put forth in 1999 and 2001 research papers from Fisk and U-M colleagues. One of those, Thomas Zurbuchen, is currently associate director of NASA’s Science Mission Directorate.

“It’s amazing to see Parker Solar Probe provide a missing puzzle piece to support and expand ideas we first thought about with spacecraft data from almost 25 years ago,” said Zurbuchen. “As Parker Solar Probe flies closer to the sun, I can’t wait to see what answers—and questions—we’ll learn next.” 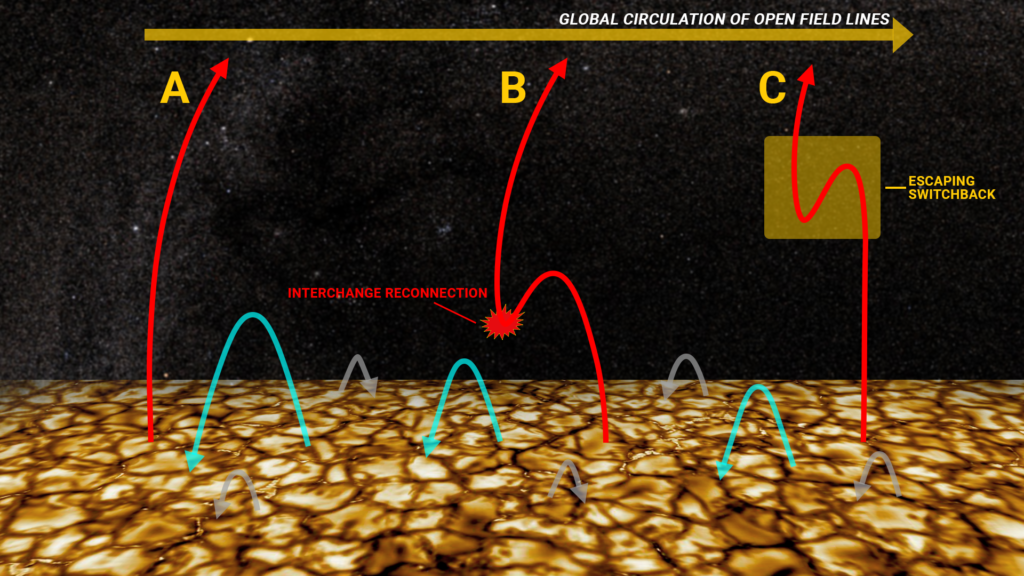 That’s how Fisk, co-author of the new APJ Letters paper, remembers his earlier work being accepted by solar physicists. It offered possible explanations for how several different solar phenomena interact, but the data to verify such things was limited by technology. Effects of the near-sun phenomena were only observed in the more distant heliosphere. The heliosphere is the region of space, including our solar system, that the solar wind influences.

In those earlier publications, Fisk theorized that, in different areas of the corona, so-called open magnetic lines that stretch from the surface of the sun out into space should circulate in a closed pattern, with motions both in the direction of and opposite to the sun’s rotation. And he also posited that the individual interchange reconnection jumps would combine to permit overall motions of the corona over the surface of the sun.

Fisk found his first clues about the strange magnetic activity in the sun’s heliosphere after combing through data collected during the ESA/NASA Ulysses mission. Launched in 1990, Ulysses was the first spacecraft to pass over the sun’s poles. There, the spacecraft recorded particle radiation that originated at lower solar latitudes—a finding that suggested the magnetic field observed by Ulysses had to be in motion in the solar corona.

The team that conducted this research included Zurbuchen and Nathan Schwadron, now a professor of physics and astronomy at the University of New Hampshire.

Since publication of those earlier papers, Fisk has moved on to other research projects. But his office neighbor just happened to be Kasper. And when Parker Solar Probe’s first data came rolling in last year, Fisk could see how it all fit together.

“Once you get confirmation of this basic process, all of a sudden, there are all of these implications for how the sun works, how its magnetic field works and how the solar wind is accelerated,” Fisk said. “It gives you the opportunity to solve many other solar and stellar physics problems because now you have the basic mechanisms.”

As Parker Solar Probe continues to move closer to the sun, the mission will provide ample opportunity to test and validate predictions by the theory.

Parker Solar Probe is part of the NASA Heliophysics Living With a Star program, created to explore aspects of the sun-Earth system that directly affect life and society. The program is managed by the agency’s Goddard Space Flight Center in Greenbelt, Maryland, for NASA’s Science Mission Directorate in Washington. Johns Hopkins APL designed, built and operates the spacecraft.

The paper is titled “Global Circulation of the Open Magnetic Flux of the Sun.”