Solar Orbiter heads for the Sun

by | February 16, 2020
After a “thunderous launch” the spacecraft begins its two-year journey to our nearest star. | Medium Read 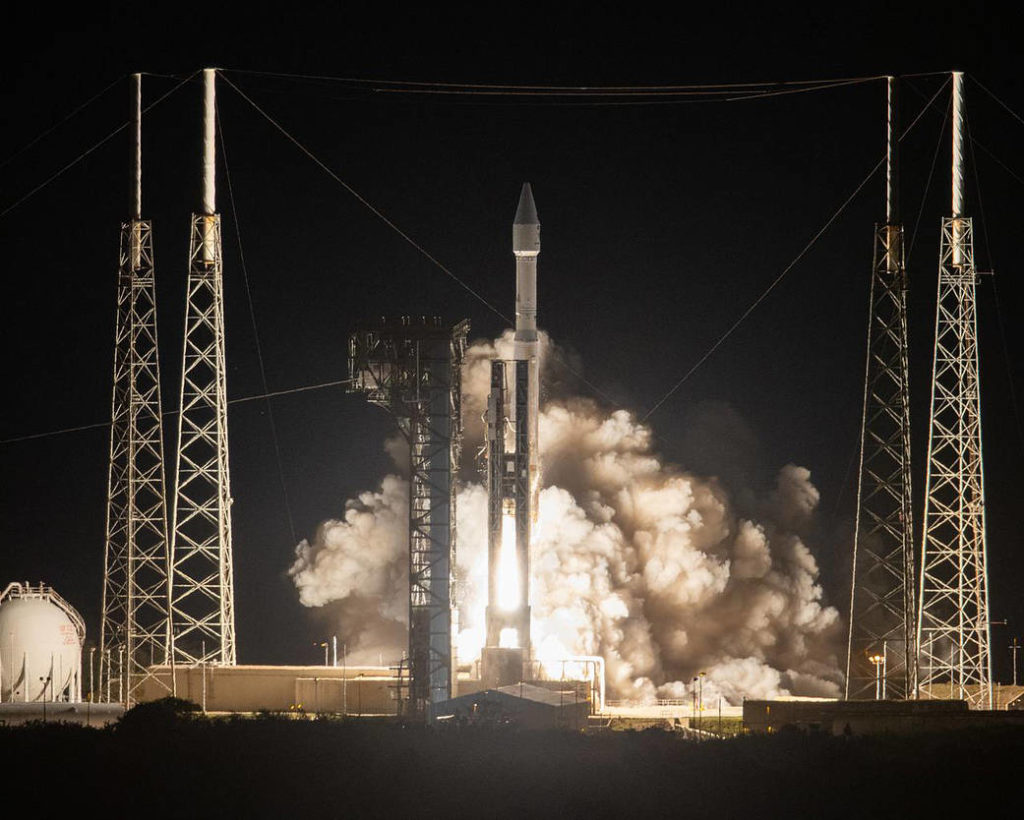 The joint ESA (European Space Agency) and NASA Solar Orbiter mission to study the Sun successfully launched from Cape Canaveral’s Space Launch Complex 41 at 11:03 p.m. EST on the evening of Sunday, February 9. The spacecraft was carried into space aboard a United Launch Alliance Atlas V rocket. For U-M Climate & Space researchers, the launch is the culmination of nearly 13 years’ work – from the 2008 approval of the mission to liftoff.

Researchers reacted to the spacecraft’s smooth departure with cheers and applause. Just over an hour later, at 12:24 a.m., word came from the European Space Operations Centre in Darmstadt, Germany of “successful signal acquisition” from Solar Orbiter. The spacecraft had alerted mission controllers that its solar panels had successfully opened.

Mission Control could now communicate directly with the spacecraft, the first of many critical milestones in the early phase of the mission. There was more cheering and applause, and the tension in the room visibly abated for the first time all evening.

The launch had been delayed twice, so the Climate & Space team was unsure what to expect on Sunday.

“With two delays just a week before, I was not at all convinced that we would see it launch on Sunday,” said Climate & Space Assoc. Research Scientist Dr. Jim Raines. “I am super excited that Solar Orbiter launched on time and that the team got to be there for it.”

Climate & Space Prof. Susan Lepri agreed. “It was thrilling and nerve-wracking to see it launch. I’m excited it went well and am looking forward to getting some data so we can embark on a search for new scientific discoveries!”

On Thursday, February 13, the Solar Orbiter team received word that the magnetometer boom, and all three Radio Plasma Wave antennae had deployed successfully. The antennas to will allow the spacecraft to communicate with mission control, and to gather scientific data as it travels toward its destination.

The spacecraft commissioning phase is next. It will take Solar Orbiter’s mission team about three months to check the 10 scientific instruments on board and ensure they are working as expected. The first phase is dedicated to instrument switch-on, and then in-flight calibration of the components and validation of their respective data products.

“The first thing we’ll do is turn on HIS, and make sure that it is receiving and responding to commands,” said Dr. Jim Raines. “That’s scheduled for March 10th.  After that, we’ll turn on the high voltage systems one by one, including the very sensitive detectors. Once we see that those are working normally, we’ll collect some science data.  After all of that, we’ll know that it is working properly.”

The commissioning phase is expected to be complete sometime after early May of this year. Although the spacecraft will not reach its primary orbit around the Sun until 2022, the HIS and the other solar wind sensors in the SWA suite will begin collecting and transmitting valuable scientific data along the way.

“When Solar Orbiter reaches its primary science orbit around the Sun, then the telescope-based remote sensing instruments on Solar Orbiter will start taking data in 30-day Remote Sensing Windows,” said Raines. “It will be at that points that we start collecting the data needed to link those two sets of observations: observations on the Sun with measurements in the solar wind.”

Watch a video of the Solar Orbiter launch: https://www.youtube.com/watch?v=Qcpk5XV6SGA